Motorola Razr V4 with 48 MP rear camera has been launched

by tatacapitalblogDecember 12, 2019 in Consumer Durable Loan, 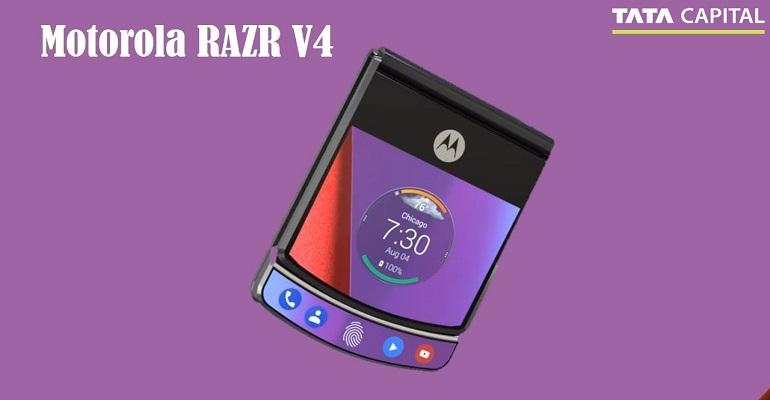 Motorola was one of the first brands to popularise the flip technology. In fact, their range of flip phones were one of the highest sold phones of all time. Several mobile brands are again competing in the race to revive the folding smartphone, so how could Motorola be left behind? The American brand is rumoured to be working on a new foldable phone as part of the famous Razr series – Motorola Razr V4. Read on to know more about the foldable phone.

The folding technology is still new and the only folding phone available in the market is Samsung’s Galaxy fold. However, unlike Samsung’s Galaxy Fold, which unfolds to become a 7.3-inch tablet, the new Razr will fold vertically. Motorola Razr is also appealingly small in size which makes it a more pocketable phone. It is speculated that V4 will be less powerful than Galaxy Fold and Huawei Mate X. This could suggest a smaller price tag.

A screen that folds

Motorola Razr phones have always been able to garner attention for their innovative designs. Razr V4 will fold inwards just like the original Razr. The phone will ditch the keypad and the small display in favour of a folding display. V4 will feature a 6.2-inch folding OLED display on the inside as its main screen and will fold in half with the help of a hidden hinge. Based on the leaked images, Motorola is using a combination of metal, glass, and plastic for the outer panels.

The new Razr will also have a smaller secondary display on the back cover, just like its predecessor. The 2.69-inch closed-display can primarily be used for checking notifications or making video calls. Motorola Razr V4 will come in three colour variants — Black, White, and Gold.

Some rumours suggest that Motorola Razr V4 will be powered by Qualcomm’s Snapdragon 710 processor. The phone is likely to come in two storage options – 64 GB and 128 GB, backed by a 2730 mAh battery.

Motorola has not given any official comments on the phone’s price or availability. However, a recent report suggests that the device will cost $1500 in the US. This converts to Rs.1,07,516.

The phone was expected to launch in India in the first half of 2019 but got delayed for unknown reasons. As per fresh reports, Motorola is likely to unveil the new Razr on 13th November at an event in Los Angeles, followed by sales next year. Considering the success of Galaxy fold in India, Motorola has a good reason to launch Razr in the country, on the same day as its international release.

If you want to relive the days of flip phones all over again, Motorola’s Razr V4 is just the right pick for you. With Tata Capital’s consumer durable loans, you can have the new Razr at attractive interest rates. Tata Capital offers flexible EMIs and no foreclosure charges.

Couple-friendly places to visit in Bali