Datsun is an automobile brand owned by Nissan Motor Company Ltd., popularly known as Nissan. Nissan is a Japanese multinational automobile manufacturer headquartered in Nishi-Ku, Yokohama. Datsun entered the Indian market in 2013 but the brand was re-launched in India with the Datsun Go, in early 2014. So far, Datsun has launched three variants for the Indian roads namely Datsun Go, Datsun Go+, and Datsun Redi-Go. Datsun Go, and Datsun Redi-Go falls under the hatchback segment whereas Datsun Go+ is a compact family wagon. All the variants of Datsun appealed the Indian customers in terms of price, quality, and features – that’s why it gained rapid popularity soon after their launches. And, interestingly, Datsun cars have equal demand for both new and used cars in India. Here, we focus some of the key reasons why people like to buy used Datsun cars.

The reviews on Datsun bring to fore that its powerful engine that is considered as one of the best in its segments. Though the hatchback variants of Datsun may appear small, they have spacious interiors and there is no compromise to legroom and shoulder room, and five passengers can comfortably fit in the compact variants. The cars also have spacious boot space. Datsun cars are designed intelligently with all dynamics for superior driving experience and short turning radius. Datsun cars are a remarkable blend of technology and smart features. This aspect allows Datsun cars to give higher mileage even with a 1.2-litre engine, and you can easily expect to get a mileage of 14 to 14.5 kilometres per liter for city drives. The default smart features includeGear Shift Indicator, Tachometer, Distance to Empty, and Average Fuel Economy while Driving; in addition to these features, the cars can be accessorized with Keyless Lock, Parking Sensor, and PU Seat Cover. Besides these features, the top end models are packed with additional features such as Power Steering, Front Power Window, Follow Me Headlights, AC, Speed Sensitive Wiper, Spinal Support Seats, Motion Sensor, Smart Mobile Docking Station with Aux and USB Support. Datsun cars are pocket-friendly variants and have low service cost too. In fact, a brand new Datsun car is priced well within Rs. 3-lakh.

These advantages are not limited to just brand new Datsun cars. They are true in the case of used cars too. However, the benefit of buying a used Datsun car is the price advantage. A car which already has a very economical price tag become even more budget-friendly once it is labelled as pre-owned. Another advantage is, Datsun cars were launched in theIndian market in 2014, indicating that any Datsun car in a pre-owned cars showroom is sparsely used, and thus giving you the opportunity of getting an almost new car. So, basically as a buyer of used Datsun car, you are in a win situation from every aspect. Indeed, these benefits are a huge appeal for entry level car buyers, but that doesn’t deter mid-level buyers to opt for a used car. All in all, when you buy a second-hand Datsun car, you automatically become the owner of a spacious, power packed, low maintenance, and pocket-friendly car. This makes it a value buy for customers across all segments.

So, when you have a second-hand car in mind and visit a pre-owned car showroom, do remember to gather details and take a test drive of Datsun models of cars. Certainly, you wouldn’t want to miss out on a deal of your lifetime in owning a car. Well, then, it’s time to make a smart choice, buy a value car, and zip through the busy city roads swiftly. 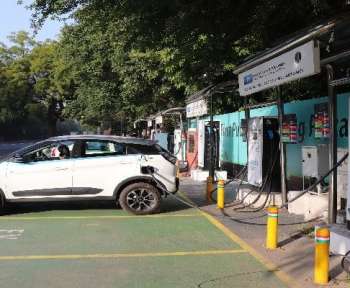 How to Buy a Used Electric Car in Hyderabad?